SAN DIEGO —Among the highlights of RISE West 2019: An amazing story of survival and heroics during our nation’s darkest day; a new way of thinking about health care innovation; and tips to change behavior to enrich the member experience. Here’s a sampling of the keynote presentations.

Richard Picciotto: A lesson in leadership from a true American hero

Richard Picciotto, retired NYC fire department chief, kicked off RISE West 2019 with a gripping first-hand account of his heroic efforts to evacuate thousands from the North Tower of the World Trade Center on September 11. His remarkable story was even more poignant as he recounted it on the day before the 18th anniversary of the terrorist attacks that killed nearly 3,000 people. 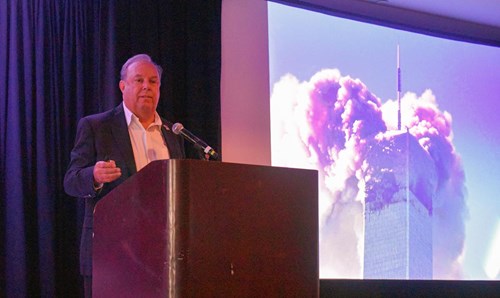 The highest-ranking firefighter to survive the World Trade Center collapse, Picciotto kept 450 attendees enthralled for an hour as he recalled his actions from the moment he first heard the call that the first plane hit the North Tower. He immediately rushed to the scene, as he knew the building well. He had evacuated the tower after the 1993 bombing and could quickly identify where the 99 elevators and three narrow stairwells were located.

As he made his way up 35 floors to rescue those trapped on the upper floors, he felt the South Tower collapse and he made the most difficult decision he made in his life: he ordered firefighters, rescue workers and civilians to evacuate the North Tower. It was a tough decision because he knew there was little hope now that the people trapped on the higher floors would survive. “We take risks. We risk our lives to save other peoples’ lives, but we take calculated risks…I thought I have to get everyone out of here,” he said.

As they headed back down the 36-inch stairwell, Picciotto stopped at each floor and swept the area to make sure no one was left behind. Twenty-nine minutes later he and the small crew of rescuers made it to the sixth floor when the North Tower collapsed, and as the floors fell, the force was like a tornado and it tossed them around like ragdolls. He thought they would die entombed in the debris.

“What do you do in the last few seconds of your life? I’ll tell you what I did. Your life flashes before you and I thought of my family, my wife and kids. For a lot of us, that is our lives…Then I prayed a compilation of every prayer I ever knew… And I prayed to God to make it quick because I didn’t want to suffer,” he recalled.

He remained trapped in the same void with 13 others for approximately five hours and it felt like an eternity. Picciotto ordered them not to move, because the void was like a house of cards. One movement could cause the pocket to collapse. Eventually the smoke shifted, and he saw a large gray spot that gradually became brighter and he decided to climb through the rubble toward the light. He emerged on the highest pile of wreckage in a 16-acre, debris-filled field that later became known as Ground Zero.

Despite the horror of that day and the devastating loss of life, Picciotto said he remembers how many people helped one another that day and how the event united the country. “Every person there, they were people like you, people who help people in need. They would say ‘I’m not going to leave Mary. I’m not leaving Charlie. We are going to get out of here together.’...It was tremendous to see people helping each other,” he said.

Reflecting on that horrible day, Picciotto said it was faith and hope that got him through it. “The American spirit is tremendous. Americans, we care for each other. The people in the building were helping each other. And this country is a giving country. After 9/11, a lot of widows lost their husbands, a lot of people supported them and paid for their kids’ education. We help those in need,” he said, noting that despite the political division in the U.S., people have more in common than they realize.

The experience also caused him to reprioritize his life. “I can tell you that during tragedies you become very focused on what’s important to your life. You get focused on family and friends. That’s what is important. That is what matters,” he said. 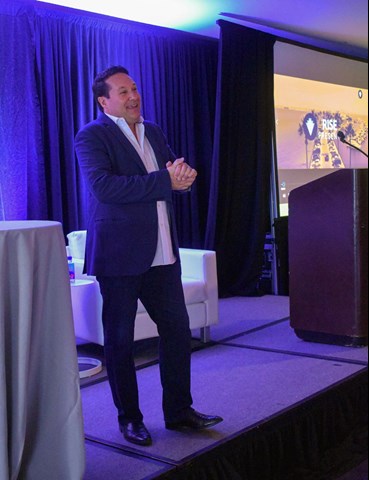 Shapiro, an innovation expert, challenged attendees to think about innovation differently. The key, he said, is not technology or the development of new products. It’s a fundamental way of thinking.

“Expertise,” he said, “is the enemy of innovation.”

Our brains are not wired for innovation because its primary function is survival, and it will repeat the past because it feels safe. “Human beings are predictable. Our past experience will often limit our future. Past success is often a predictor of future failure,” he said.

Shapiro, who oversaw a 20,000-person innovation practice at Accenture, where he worked for 15 years, said one common mistake is when leaders ask everyone for ideas. Just because everyone has an opinion or an idea doesn’t mean it’s a good one. Often, he said, in the world of innovation there is “mob sourcing,” where a vocal few who are most passionate about the topic are the ones who circumvent it by possibly pushing out better ideas.

Another problem: leaders often ask broad, abstract questions. The goal, he said, is to ask the right questions.

He used the example of an airport in the U.S. that wanted to tackle the biggest complaint that its passengers had: the baggage claim took too long. So, airport leaders focused on what they could do to speed up the baggage process and reduce passenger wait time. They invested money in faster conveyor belts, better technology and more baggage handlers. The changes led to a significant decrease in wait times. Instead of an average 15 to 20 minutes, passengers only had to wait 8 to 10 minutes for their luggage, but travelers were still unhappy and complained that the wait time was too long. That’s when the leaders realized they were asking the wrong question. Instead of focusing on how to speed up the unloading of the bags, they decided to ask themselves, how they could slow down the passengers. By reconfiguring the airport, it took passengers an average of 8 to 10 minutes to depart from the plane and get to the baggage carousel. When they arrived, their bags were waiting.

“The point is if you constantly ask how we can speed up the bags, you’ll never think to slow down the passengers,” he said. 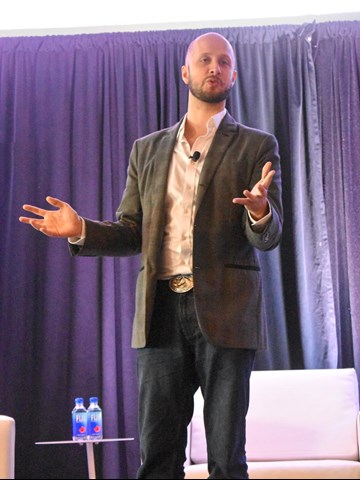 Wallaert, chief behavioral officer at Clover Health, a Medicare Advantage insurance company, encouraged attendees to think about how to

For example, he asked, how do we reduce the number of cigarette smokers in this country? Taxes are a powerful inhibiting pressure, he noted, adding, that in New York the taxes are more expensive than the cigarettes themselves. There is also a health threat. If you smoke, you will die. Death, he said, is a powerful inhibiting pressure. And if that isn’t convincing, consider the second-hand smoking moment. Cigarettes won’t just kill you. They will kill the person next to you.

He also recounted his failure as a teenager trying to teach his mother, a floor nurse in rural Oregon, how to use a computer. At the time, women weren’t encouraged to use computers, but he tried to sell her on how cool computers were and how she could play videos on it. She would cry when he tried to teach how to use it. But for the last 10 years of her career, she worked in clinical informatics. How did the hospital convince her she could learn the computer? Leaders didn’t focus on the computer, he said. Instead, they told her to think about patients and their health outcomes. “They told her you get better outcomes when you use the computer,” Wallaert said, noting that the hospital also posted signs of women using the computer around the building. “They removed the inhibiting pressure.”

Wallaert said that last year Clover Health wanted to increase the number of members who got a flu shot to reduce hospitalizations and prevent deaths. There are several factors that prevent people from getting flu shots, he noted. Some don’t see the need if they are healthy; others are distrustful because each year the formula changes and it’s not always effective; and others are afraid of potential side effects. The way to change behavior is to help members understand that the flu shot doesn’t just protect the person who gets the vaccination; it is to prevent other people from getting sick or dying if you infect them. So, the organization sent personalized letters that encouraged members to think about their grandchildren. By getting a flu shot, they would protect their grandchildren from getting sick. The letters led to a 5 percent increase in the number of members who got a flu shot.