LAS VEGAS—Senior citizens typically don’t want to shop for insurance products. But this year 1 out of 3 seniors either switched health plans or felt compelled to at least look at other options, according to George Dippel, senior vice president of client services, Deft Research, LLC. And about half of those who switched plans did so even though they were happy with the coverage they had in 2018.

Dippel, a featured speaker at last week’s 12th Annual Medicare Marketing & Sales Summit, discussed the trends in Medicare shopping and switching during this year’s Annual Election Period and what the findings mean for health plans. 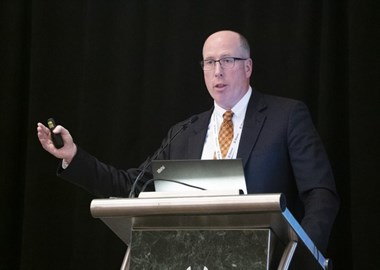 The findings are based on the market research firm’s

2019 Medicare Shopping and Switching Study, which analyzed the responses of 3,554 seniors who either had a 2018 Medicare Advantage plan (MA), a 2018 MedSupp plan, or an original Medicare only plan for 2018. The survey was administered from Dec. 10 to Dec. 31, 2018. Below we summarize the highlights of the study.

The national MA market was relatively stable—except in these four regions. Dippel said that MA members in Minnesota, Northern California, Illinois, and Maryland were disproportionately forced to switch their coverage. Minnesota experienced the most significant plan disruption with 400,000 members forced to switch plans because of a federal competition requirement that eliminated Medicare Cost plans in most counties of the state.

MA plans that increased premiums for 2019 saw drops in memberships. Dippel said that each 1 percent increase in a premium was associated with a 0.1 percent membership drop on average. The average premium increase for 2019 was 6 percent.

Roughly 10 percent of Medicare members switched plans or insurers during the 2019 AEP. Seniors spent time looking at new coverage options if their current plan had a negative change in either access or cost-sharing:

MA members were twice as likely to switch plans or insurers during the AEP than those with MedSupp. Dippel said that is likely because MA members face fewer barriers to switching plans (no medical underwriting, for example) and MedSupp members can change plans at any point throughout the year.

Half of switchers were satisfied with their 2018 coverage but shopped around anyway and found a better 2019 option. Why did they shop around? Most said they wanted to conduct “due diligence” to make sure the coverage they had in 2018 was still the best option in 2019. This means insurers could lose members to competitors that have even more appealing coverage options. Therefore, Dippel said, plans should add or increase benefits and benefit levels next year to keep existing members and attract new ones.

Most popular supplemental benefits: Eyewear and over-the-counter (OTC) pharmacy allowances. Nearly half of MA members surveyed said they would be more likely to switch to a different MA plan if it offered annual eyewear coverage. Close to two-thirds of MA members also said transportation benefits would influence to some degree their likelihood to switch plans. But the most popular combination of potential supplemental benefits that would entice the largest proportion of MA seniors to switch plans is a three-benefit package that included an eyewear allowance, gym benefit, and OTC pharmacy allowance.