Women in Health Care Leadership: Judy Hoberman on the glass floor, the #MeToo movement, and resilience

Judy Hoberman, a coach, trainer, and author of “Walking on the Glass Floor” and “Selling in a Skirt,” will be a featured speaker next April at the Women in Health Care Leadership Summit in San Diego. Her presentation will focus on how to ask for what you want and what you’re worth during negotiations. RISE caught up with this dynamic speaker to ask her about the different leadership styles of men and women, what she means by the glass floor, the unintended consequences of the #MeToo movement, and how to bounce back from failure. 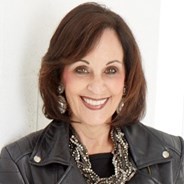 In the age of the #MeToo movement, which has shined a light on the widespread prevalence of sexual assault and harassment in the workplace, many women have been inspired to share their stories and help develop strategies to end the unwanted behavior. But will the movement put women on a level playing field and offer them more opportunities in the workplace?

Judy Hoberman, a coach, trainer, and author of “Walking on the Glass Floor” and “Selling in a Skirt,” isn’t so sure. While there is potential to create equality in the workplace, Hoberman says she has seen the unintended consequences since the movement launched a little more than a year ago. Those aftereffects? Men who don’t want to mentor or hire women.

“Men are afraid of taking a risk,” says Hoberman, who will be a featured speaker at the Women in Health Care Leadership Summit next April in San Diego. “I do think the #MeToo movement is a great, safe place for women. But I am hearing of the fall back.”

To counteract the negative consequences, she suggests that men can still serve as mentors to women, but they should work together in an open environment instead of a closed office. “So, there is no way people could say you were inappropriate if you were in the lobby of a building or a Starbucks.”

It’s vital that women leaders have mentors, she says. And though having another woman serve in that role is beneficial, it’s also important that women have the male perspective. For Hoberman, if she didn’t have men as mentors, she wouldn’t have had any at all because there were no other women in high leadership positions when she worked in the insurance industry. “I was mentored by very successful men. I learned a lot about how to do business and transactions…So if there is no woman to mentor you, find a great man. It can be someone outside your company who has a skill set you admire.”

How to walk on the glass floor

Mentors are also important once women crash through the glass ceiling, Hoberman says. “The glass floor is the flip side of the glass ceiling. Everyone talks about crashing through the ceiling, but where do you land?” For many women, once they land in a leadership position, there is no one there to support and mentor them, she explains.  “A lot of companies have few women in leadership…With the glass floor, you bring women into a leadership position, so you can support them, and they stay. Retention is the hard part,” she says.

There are differences in the leadership styles of men and women, according to Hoberman. Often, they don’t know how to communicate with one another. She tells her female clients to think about the men in their lives and how they like to hear information. “They don’t tell stories; they talk in bullet points. Women are storytellers,” she says.

Women leaders are often better with the softer skills, or the people skills, and need to use them and understand their importance. “These are traits that women naturally have. Some women don’t realize they have them or realize that they are leadership traits,” Hoberman says.

Some companies have trouble recruiting women to leadership positions, she says. When that happens, Hoberman suggests they look at how they describe the job in advertisements. In many cases, the ads might describe the position as aggressive and competitive. And this is another difference between men and women. If a man is 60 percent qualified for a position, he will apply for it. But a woman must be 100 percent qualified or she won’t apply for the position. For example, Hoberman says that one of her clients put in a job advertisement that a master’s degree was preferred. Women without a master’s degree wouldn’t apply because they don’t want to waste their time or the company’s time. But a man without a master’s degree would likely go after the position. She told the client to only mention the master’s degree if the position requires it or don’t put it in at all. “It’s a differentiating point for women,” she says.

Learning from your mistakes

Hoberman also says that women must learn how to bounce back when something doesn’t go their way, such as not getting the promotion. “I tell people you absolutely have the right to wallow. You should. It’s a grieving process. But you have to have a time limit,” she says. “And two, you have to learn from it. Why didn’t you get it? Were you prepared?  Did you really want it? If you don’t learn from it, then why even try?”

Editor’s note: Hoberman will be a presenter on Monday, April 29, the first of the two-day Third Annual National Women in Health Care Leadership Summit. She will discuss how to walk on the glass floor and ask for what you want and what you're worth. To learn more about the conference, or to register, click here.