Women in Health Care Leadership: Erin Hatzikostas on authenticity as a secret weapon for success

After more than 20 years in the corporate world, Erin Hatzikostas left her role as CEO at a health care financial institution and reimagined her career as a best-selling author, TEDx speaker, executive coach, and founder of b Authentic. Hatzikostas, who will be a speaker at the RISE Women in Health Care Leadership Summit on Dec. 14-15 in San Diego and RISE National 2022 on Mar. 7-9 in Nashville, talked to RISE about strategic authenticity and how women can change the job rather than change themselves for the job. 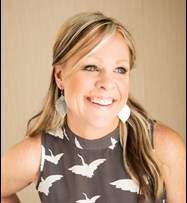 Erin Hatzikostas always felt like she was playing a different game than her corporate counterparts. While colleagues were hopping on planes every week to wine and dine clients or giving up family vacations, she never felt she made the same degree of sacrifices. She feared it made her unqualified, or that she was just lucky in her career and could lose it at any moment. But it was later in her career after success as a CEO who turned the company around in three years, when she made the decision to retire at age 44, that she discovered the root to her success: authenticity.

As Hatzikostas prepared for her retirement, she repeatedly heard from her colleagues how much they would miss her authentic leadership. “In that moment, I realized it was that I was playing a different game,” she said. “As an executive, I had this epiphany—and hindsight is 20/20—I had actually used authenticity as my secret weapon, as my strategy. It was the thing that I did to have success but to do it without selling out.”

While she originally planned to run her own software company after retirement, Hatzikostas soon realized she had a bigger message to share that could help other professionals like her. “I realized I had something that I had figured out; that authenticity wasn’t just a permission; it was a power. And it was something I wanted to go out and teach people how to do,” she said.

How to harness your authenticity as a success strategy

To help individuals and companies come from a place of authenticity to further their success, Hatzikostas developed a framework called The Six Principles of Strategic Authenticity: humility, unexpected, model, spark, narrate, and adapt (H.U.M.A.N.S), which she’ll share during her presentation at the RISE Women in Health Care Leadership Summit and RISE National 2022.

Each acronym is like an ingredient, explained Hatzikostas, and she works with her clients to sprinkle the ingredients and apply the principles to what they’re trying to achieve.

Using the first ingredient, humility, as an example, Hatzikostas shared how she guides clients to use humility purposefully. When a client had an important upcoming interview, she helped craft what she calls an “intriguing intro,” an introduction that encompasses a humility moment—to form connection and trust—that’s paired with a “big brag” to share a significant achievement that crescendos into a memorable, intriguing story. She recommends sprinkling humility in wherever you can, whether in an interview, business meeting, or on your LinkedIn profile, due to the pure power it has to create an immediate connection with others.

Beyond her Six Principles of Strategic Authenticity, Hatzikostas teaches what it really means to be authentic, something she believes takes much more than just being yourself.

“Yes, you could go out and be just great to yourself and be who you are—but that’s not where the real power is,” she said. “The real power is when you think of authenticity as something, first and foremost, for the other person. That it’s not about you, it’s actually about bucking the norm, being human, exposing something of yourself, so that it creates connection, and trust, and intrigue, and then what happens from that is the results come back to you.”

Recalling a moment her own authenticity helped someone demonstrate his authenticity, she shared a story from her time as CEO during a work celebration in which colleagues were egging on a coworker, known for his dancing, to show off some moves. Noticing he was embarrassed in front of the leadership team, Hatzikostas took it upon herself to do “the running man” next to the employee, lightening the mood and helping him feel comfortable to be himself. It was a small, human moment that formed connection.

“I believe that authenticity is about exposing who you are when people least expect it,” said Hatzikostas.

Hatzikostas will discuss authenticity as a secret weapon more on Tuesday, Dec. 14, during The RISE Women in Health Care Leadership Summit in San Diego and on Wednesday, Mar. 9, at RISE National 2022.