This year RISE partnered with health care analytics company Cotiviti to conduct research (both surveys and in-depth interviews) on risk adjustment and quality integration. More than 55 health plan systems contributed insights into the reasons for integration. Fifty-four percent of respondents were from smaller-sized health plans (less than 500,000 members) and 18 percent were from larger-sized health plans (more than 2 million members). In this article RISE previews highlights of the findings. The complete results will be unveiled during the 13th Annual RISE Nashville Summit, March 17-19 at the Gaylord Opryland Resort.

Perhaps the biggest takeaway from the RISE-Cotiviti survey is that it highlights the industry’s reluctance to move toward risk adjustment and quality integration. And if health plans do embrace the concept and move forward with integration it’s because money is driving their decision.

“At the end of the day, if it generates more revenue, they will do it. If it will only increase internal effectiveness or star ratings, they aren’t going to do it,” says David Costello, Ph.D., chief analytics officer for Cotiviti, who will co-present the full findings of the survey with RISE Executive Director Kevin Mowll at RISE Nashville, March 17-19.

The size of the plan also didn’t matter. Although smaller plans may be a little more flexible, Costello says, they are like large plans when it comes to strategy.

Operational efficiency is not a key driver, Costello says. “It’s not that other factors (like minimizing physician abrasion or reducing operational costs) aren’t that important, but they pale to the others,” he says. 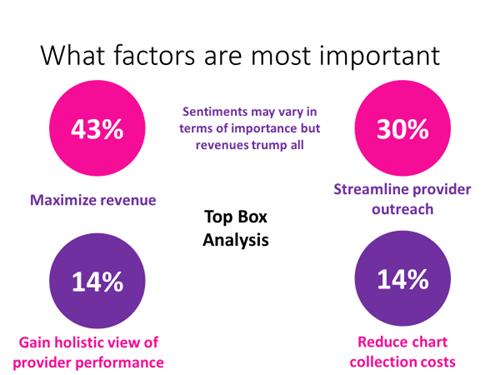 The findings also reveal that health plans understand the importance of integration, but they haven’t made it a priority. “People understand what it is, but they are not willing to do the hard work to get it,” Costello says.

The survey found that the most important factor for health plans when it comes to their overall organization: maximizing revenue (43 percent). Falling into second place was streamlining provider outreach (30 percent).

Costello says he was also struck by the factor deemed not at all important. Forty-one percent of respondents rated streamlining and reducing the cost of chart collection as the least important factor. 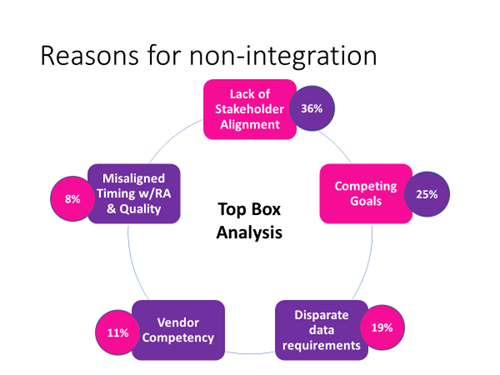 The speed of moving toward integration is also telling, he says. Only 13 percent of the respondents said their organizations will become fully integrated into the next two or three years. Thirty-two percent indicated that it will take four to five years. But Costello says that it will likely take those organizations twice that time to achieve it.

Editor's note: The full survey results will be revealed during the second day of RISE Nashville, Tuesday, March 19 at 8 a.m.