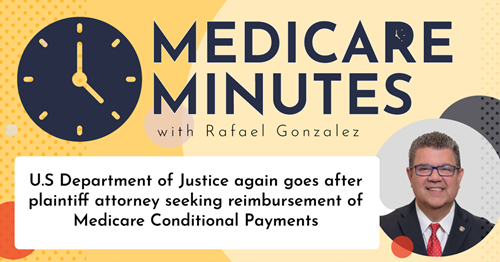 Pursuant to the Medicare Secondary Payer provisions of the Social Security Act, 42 U.S.C. 1395y(b)(2), when Medicare has made a payment on an auto, liability, no-fault, or workers’ compensation claim, it is entitled to reimbursement from the primary payer, including the beneficiary’s attorney.

Three recent cases remind us that attorneys who represent Medicare beneficiaries in auto, liability, no-fault, and workers’ compensation claims have responsibility in making sure Medicare is reimbursed if in fact Medicare has made payments related to such claims.

Case 1: Baltimore plaintiffs’ law firm pays the U.S. more than $90K
On November 4, United States Attorney for the District of Maryland Robert K. Hur announced that Saiontz & Kirk, P.A., a Baltimore-based law firm, paid the United States $91,406.98 to resolve allegations that it failed to reimburse Medicare for conditional payments that had been made to medical providers on behalf of firm clients.

“Plaintiffs’ attorneys cannot refer a case to or enter into a joint representation agreement with co-counsel and simply wash their hands clean of their obligations to reimburse Medicare for its conditional payments,” said Hur. “We intend to hold attorneys accountable for failing to make good on their obligations to repay Medicare for its conditional payments, regardless of whether they were the ones primarily handling the litigation for the plaintiff.”

According to the settlement agreement, “over a number of years, Medicare made conditional payments to health care providers to satisfy medical bills for firm clients. During that period, the firm referred clients to or entered into joint representation agreements with co-counsel on four of the six matters about which the U.S. Attorney’s office contacted the firm. The government contends that the firm, either itself or together with co-counsel, negotiated for and received settlement proceeds for the firm’s clients, but neither the firm nor its clients repaid Medicare for conditional payments that Medicare made to medical providers.

Case 2: Maryland plaintiff’s law firm agrees to pay the U.S. $250K
On March 18, Hur announced that Meyers, Rodbell & Rosenbaum, P.A., a Maryland law firm with offices in Riverdale Park and Gaithersburg, entered into a settlement agreement with the United States to resolve allegations that it failed to reimburse the government for certain Medicare payments made to medical providers on behalf of a firm client.

According to the settlement agreement, in and prior to 2012, Medicare made conditional payments to health care providers to satisfy medical bills for a client of the firm. In December 2015, with the firm’s assistance and representation, the client received a $1,150,000 settlement in a medical malpractice action stemming from the client’s injuries. After Medicare was notified of the settlement, it demanded repayment of the Medicare debts incurred from those conditional payments. The firm refused to pay the debt in full, even when the debt became administratively final.

Under the terms of the settlement agreement, the firm agreed to pay the United States $250,000 to resolve the government’s claims. The firm also agreed to (1) designate a person at the firm responsible for paying Medicare secondary payer debts; (2) train the designated employee to ensure that the firm pays these debts on a timely basis; and (3) review any outstanding debts with the designated employee at least every six months to ensure compliance.

Case 3: Philadelphia plaintiff’s law firm agrees to pay $28K to reimburse the U.S. for Medicare Conditional Payments
On June 18, 2018, U.S. Attorney William M. McSwain announced that Philadelphia personal injury attorney Jeffrey Rosenbaum, and his law firm, Rosenbaum & Associates, entered into a settlement agreement with the United States to resolve allegations that they failed to reimburse the United States for certain Medicare payments the government had previously made to medical providers on behalf of firm clients who sought medical care.

Under the terms of the settlement agreement, Rosenbaum agreed to pay a lump sum of $28,000. Rosenbaum also agreed to (1) designate a person at the firm responsible for paying Medicare secondary payer debts; (2) train the designated employee to ensure that the firm pays these debts on a timely basis; and (3) review any outstanding debts with the designated employee at least every six months to ensure compliance. In addition, Rosenbaum acknowledged that any failure to submit timely repayment of Medicare secondary payer debt may result in liability for the wrongful retention of a government overpayment under the False Claims Act.

Congress enacted these rules to ensure repayment from responsible parties, and as we have seen over the last several years, the federal government intends to hold all primary payers, including attorneys, accountable for failing to make good on their obligation to reimburse Medicare when it has made payments related to an underlying auto, liability, no-fault, or work comp claim.

Editor’s note: This is the sixth of a seven-part blog series. The first post focuses on the accessibility of open debts reports. The second post reviews the calculation of annual recovery thresholds for certain liability insurance, no-fault insurance, and workers’ compensation settlements, judgments, awards, or other payments. The third post reviews the changes in the Workers’ Compensation Medicare Set-Aside Arrangement Reference Guide. The fourth post deals with the extension of the Mandatory Reporting Civil Money Penalties Notice of Proposed Rulemaking to December. The fifth post examined the possible creation of federal regulations that provide options on how to take Medicare’s future interests into account.

About the author
Rafael Gonzalez, Esq. is president of UnitedHealth Group/Optum’s Workers Compensation and Auto No-Fault Settlement Solutions and based in Tampa, Fla. With 35 years of social insurance experience, he oversees the organization’s mandatory reporting, conditional payments, and set aside allocation process and services. He blogs on liability, no-fault, workers’ compensation, social security, and Medicare/Medicaid issues at www.MedicareInsights.com. He speaks throughout the country on these substantive issues and is engaged in the workers’ compensation, social security, and Medicare/Medicaid legislative process at both the state and federal levels. He is active on social media, including LinkedIn, Twitter, Facebook, Instagram, and YouTube. He can be reached at rafael.gonzalez1@optum.com or at 813.967.7598.