In his latest blog post, Rafael Gonzalez, Esq., president, Optum Settlement Solutions, looks at the possible creation of federal regulations that provide options on how to take Medicare’s future interests into account. 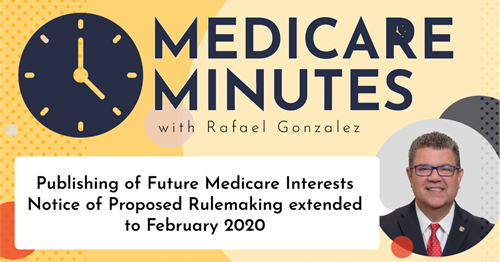 To date, Medicare has not established a similar process for beneficiaries and payers to use to meet their MSP obligations with respect to “future medicals” in liability insurance (including self-insurance) and no-fault situations. The Centers for Medicare & Medicaid Services (CMS) has previously solicited comments on whether and how Medicare should implement such a similar process in liability, no-fault, and workers compensation insurance situations, but such requests have never produced any final rules or regulations on how and when to take Medicare’s future interests in such claims. CMS has once again shown an interest in exploring options to assist parties take Medicare future interests into account, protecting beneficiaries, payers, and the Medicare Trust Funds.

The 2012 Advance Notice of Proposed Rulemaking on Medicare Future Interests

In June 2012, CMS published an Advance Notice of Proposed Rulemaking (ANPRM), providing seven options on how to take Medicare’s future interests into account when settling future medical care in liability claims. The ANPRM solicited “comments to protect Medicare's interest with respect to MSP claims involving automobile and liability insurance (including self-insurance), no-fault insurance, and workers' compensation when future medical care is claimed or released in a settlement, judgment, award, or other payment.”

CMS received several comments. Many of them expressed concerns that “there is no statutory authority permitting CMS to impose any obligation or granting a right of recovery against an insurer or self insured with regard to future medicals.” Several individuals and organizations also indicated “CMS lacks authority with respect to insurers and self-insureds regarding future medicals in liability claims.” In addition, there were several comments suggesting, “there is no current law that imposes any obligation on insurers or self-insureds for medical expenses incurred after the date of a liability settlement.”

Many industry stakeholders pointed out that “the workers compensation MSA process is inefficient, ineffective, and inadequate. Using that same process would undercut the ability of insurers, self- insureds, and beneficiaries to handle and timely settle liability claims.” Several organizations suggested, “the WCMSA process is flawed with a current volume of less than 30,000 annually. Can anyone imagine the chaos in liability when the number of claims within the United States involving bodily injury payments is estimated in the millions annually?”

Overwhelmingly, those who filed comments to the ANPRM expressed the concern that “tort settlements will grind to a halt and administrative costs will increase exponentially.” It seemed unanimous among those responding the belief that “an already overburdened and underfunded state and federal courts system will be unable to move cases along.”

Withdrawn Proposal in 2014 and new announcement in 2016

Although CMS never published a response to the comments it received, and as a result the industry never learned the agency’s position on the concerns that it had no statutory authority to promulgate such rules, the WCMSA process was inadequate, and costs concerns would overwhelm the system, it voluntarily withdrew the ANPRM in August 2014.

However, in June 2016, CMS announced it was again “considering expanding its voluntary MSA amount review process to include the review of proposed liability insurance (including self-insurance) and no-fault insurance MSA amounts.” CMS indicated it had “plans to work closely with the stakeholder community to identify how best to implement this potential expansion.” CMS further informed it would “provide future announcements of the proposal and expected to schedule town hall meetings later this year.”

Latest 2018 attempt and extension to February 2020

Despite the announcement in 2016, the industry never heard or received any further news or developments until December 2018, when the Office of Information and Regulatory Affairs (OIRA), Office of Management and Budget (OMB), Executive Office of the President (EOP) again announced a renewed attempt to expand the MSA program.

It published an announcement indicating “Medicare does not currently provide beneficiaries with guidance to help them make appropriate choices regarding their future medical care expenses and their need to satisfy their MSP obligations.” The Notice of Proposed Rulemaking (NPRM) will “produce Code of Federal Regulations (CFRs) to provide beneficiaries options for meeting future medical obligations that fit their individual circumstances, while also protecting the Medicare Trust Fund.” The announcement indicated CMS expected to publish the NPRM in September 2019, and later in October 2019. f

Without any announcement in either September or October 2019, in November 2019, OIRA announced that the expected date of publishing the NPRM had been extended to February 2020.

For those of us who have grown up with the MSP Act as a component of Medicare’s savings mechanism, we have seen, felt, and experienced the slow but sure growth, involvement, effect, and consequences of its provisions play out in auto, liability, no-fault, and workers compensation claims.

As the annual Social Security and Medicare Trustees Report has indicated for many years now, given the growth of Medicare beneficiaries expected over the next 25 years, and the shrinking number or workers contributing to the trust fund, and therefore the continuing financial challenges foreseen, Medicare is expected to remain in short term and long-term financial trouble.

As a result, in order to survive and be able to serve the next generation of Americans, Medicare has had to become significantly more aggressive about recouping payments, especially from auto, liability, no-fault, and work comp primary payers. This may certainly explain HHS’ renewed interest and intent to produce regulations in which CMS will expand its voluntary MSA review process to include the review of proposed liability insurance (including self-insurance) and no-fault insurance MSA amounts.

Although the MSP Act is now 39 years old, it is clearly still growing and evolving, finding its way to all claims where a Medicare beneficiary is involved in an accident or incident where a primary payer is or may be responsible. MSP’s reach continues to spread, as it not only affects beneficiaries with traditional Medicare coverage, but also includes beneficiaries insured through Medicare Advantage Plans and Prescription Drug Plans. Considering the comparative low number of dollars CMS has recouped in auto, liability, no-fault, and worker’s compensation claims, it is not a surprise that these will be the agency’s next focus with plans to create federal regulations that specifically provide options on how to take Medicare’s future interests into account.

Editor’s note: This is the fifth of a seven-part blog series. The first post focuses on the accessibility of open debts reports. The second post reviews the calculation of annual recovery thresholds for certain liability insurance, no-fault insurance, and workers’ compensation settlements, judgments, awards, or other payments. The third post reviews the changes in the Workers’ Compensation Medicare Set-Aside Arrangement Reference Guide. The fourth post deals with the extension of the Mandatory Reporting Civil Money Penalties Notice of Proposed Rulemaking to December.

Rafael Gonzalez, Esq. is president of UnitedHealth Group/Optum’s Workers Compensation and Auto No-Fault Settlement Solutions and based in Tampa, Fla. With 35 years of social insurance experience, he oversees the organization’s mandatory reporting, conditional payments, and set aside allocation process and services. He blogs on liability, no-fault, workers’ compensation, social security, and Medicare/Medicaid issues at www.MedicareInsights.com. He speaks throughout the country on these substantive issues and is engaged in the workers’ compensation, social security, and Medicare/Medicaid legislative process at both the state and federal levels. He is active on social media, including LinkedIn, Twitter, Facebook, Instagram, and YouTube. He can be reached at rafael.gonzalez1@optum.com or at 813.967.7598.