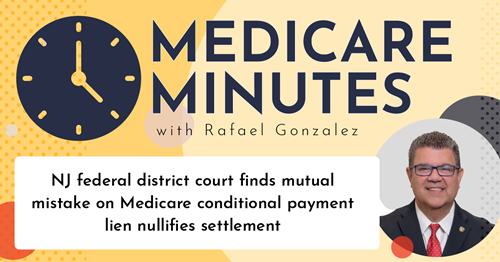 On June 30, 2020, the United States District Court for the District of New Jersey published its opinion on Osterbye v. United States,  finding that because Plaintiffs did not exhaust administrative remedies until June 26, 2019, Plaintiffs' Medicare Secondary Payer (MSP) Act private cause of action is not time-barred. The court also concludes that because the settlement reached was a result of a mutual mistake, it is not binding. Therefore, the court declines to dismiss Plaintiffs' claims based on the terms of the Release.

On or about April 25, 2009, Plaintiffs' decedent, Anna May Osterbye (Osterbye), a Medicare beneficiary, was injured in a fire at her home. The fire allegedly resulted from the negligence of a plumbing contractor, who was insured by Selective. In 2011, Osterbye initiated suit against the contractor.

Prior to trial, the parties agreed to mediation and ultimately settled the matter. The settlement was for a lump sum in the amount of $740,000 based on known damages, including $13,562.90 that Medicare estimated it would seek for reimbursement of conditional payments. On April 29, 2013, Plaintiffs executed a Release, under which Plaintiffs "released and gave up any and all claims and rights which Plaintiffs may have against the plumbing contractor." Plaintiffs also "agreed that they will not seek anything further, including any other payment."

Plaintiffs proceeded to exhaust administrative appeals with Medicare. On June 26, 2019, the Medicare Appeals Council dismissed Plaintiffs' request for review. On August 28, 2019, Plaintiffs initiated this action against the United States of America, the Secretary of Health and Human Services, United States Department of Health and Selective. On May 4, 2020, Plaintiffs and Federal Defendants stipulated to the dismissal of Federal Defendants with prejudice.

Must administrative remedies be exhausted?

Here, the parties' arguments set forth two issues: (1) Must a plaintiff exhaust administrative remedies with Medicare prior to initiating suit under the MSP's private cause of action? (2) What statute of limitations is applied to a private right of action under the MSP? Because the Court finds that Plaintiffs were required to exhaust administrative remedies with Medicare before filing a claim under the MSP, the Court declines to consider the statute of limitations issue.

Selective argues that Plaintiffs' MSP claim is time-barred because Medicare sent its final conditional payment letter on June 4, 2013 and Plaintiffs failed to bring a claim against Selective within six years of that notice. Plaintiffs argue that § 1395y(b)(3) does not contain a statute of limitations and that, even if a statute of limitations is imposed, Plaintiffs' claim is equitably tolled because Plaintiffs were required to exhaust administrative remedies through Medicare before filing suit in federal court. On reply, Selective argues that Plaintiffs were not required to exhaust administrative remedies with Medicare before bringing a private cause of action against Selective.

If the primary plan fails to reimburse Medicare, Medicare beneficiaries and other private entities may pursue reimbursement of Medicare's conditional payments from a primary plan through the MSP's private cause of action, § 1395y(b)(3). Where plaintiffs' claim is rooted in, and derived from, the Medicare Act, the claim arises under the MSP and plaintiffs are required to exhaust administrative remedies before seeking judicial review. Courts have found that claims concerning reimbursement of secondary payments arise under the Medicare Act. To that end, exhaustion requirements apply to MSP claims against private insurers.

Should release be enforced or nullified based on mutual mistake?

In New Jersey, courts employ a "strong policy of enforcing settlements based upon the notion that the parties to a dispute are in the best position to determine how to resolve a contested matter in a way which is least disadvantageous to everyone." In furtherance of this policy, New Jersey courts strain to give effect to the terms of a settlement wherever possible.

However, a compromise which is the result of a mutual mistake is not binding and consent to a settlement agreement is not considered freely given when it is obtained as the result of a mistake. The doctrine of mutual mistake applies when a mistake was mutual in that both parties were laboring under the same misapprehension as to a particular, essential fact. “Where a mistake of both parties at the time a contract was made as to a basic assumption on which the contract was made has a material effect on the agreed exchange of performances, the contract is voidable by the adversely affected party."

Here, whether the Release Plaintiffs executed should be nullified based on mutual mistake turns on the basic assumptions of the parties at the time of the release—a factual inquiry that is better left for a later time. It is enough that Plaintiffs allege that the settlement was for a lump sum based on known damages, including $13,562.90 that Medicare estimated it would seek for reimbursement of conditional payments and that the Release was not based on Medicare's additional lien. The Court, therefore, declines to dismiss Plaintiffs' claims based on the terms of the Release.

For these reasons, the Court denies Selective's Motion to Dismiss.