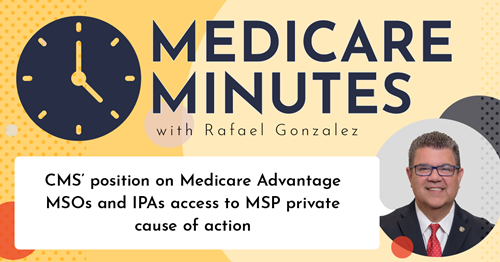 It doesn’t happen every day. As a matter of fact, it seldom, if ever, happens. Despite the many invitations the Centers for Medicare & Medicaid Services (CMS) has received over the years to provide an opinion, an analysis, a study, a confirmation, or an indication of a certain component or provision of the Medicare Secondary Payer Act (MSP), neither the agency nor the Department of Health and Human Services (HHS) has ever responded, answered, or agreed to participate in such proceedings.

Well, that changed on June 8, 2020, when HHS filed a brief as amicus curiae, after the appellate court looking to decide MSP Recovery Claims, Series, LLC et al., v. ACE American Insurance Company, et al., which consolidated cases number 18-12139, 18-12149, 18-13049, and 18-13312, asked CMS to “advise the panel of its views regarding the appropriate interpretation of 42 U.S.C. § 1395y(b)(3)(A) and whether certain Management Service Organizations (MSOs) and Independent Physician Associations (IPAs) may access the private right of action.”

The facts of the consolidated cases

All four cases consolidated in this appeal share the same general facts. A Medicare Advantage Organization (MAO) contracts with a Management Service Organization (MSO) to perform certain administrative functions associated with the services the MAO must provide its members, and with an IPA to assist with various medical tasks the MAO must provide its members. The MAO goes bankrupt and as part of its closure it purportedly signed a document providing a South Florida law firm, and ultimately MSP Recovery Claims, with assignment rights, including rights to its MSP private cause of action double damages.

Over the last eight years, several cases decided by multiple courts around the country have ruled that MAOs have the same rights as traditional Medicare to seek reimbursement of conditional payments pursuant to the MSP Act. In addition, several courts have also now agreed that assignees of the MAO also have the right to seek such reimbursement, including double damages. This case asks whether assignees of certain MSOs and IPAs may access the MSP private right of action.

The US 11th Circuit’s invitation

These consolidated appeals arise from claims brought by entities that purport to have received assignments of causes of action under the MSP private right of action. Plaintiffs assert, in particular, that certain MSOs and IPAs have “assumed the risk of MAOs” in the sense that they are compelled to “reimburse their respective MAOs for conditional payments made pursuant to the Medicare Secondary Payer Act.” The claims were dismissed by the United States District Court for the Southern District of Florida on the ground that  “only MAOs, providers, and beneficiaries—and not plaintiffs’ alleged assignors—can access the private right of action.”

Because HHS administers the Medicare program and, therefore, has a significant interest in the interpretation of the statute at issue in this case, on appeal from the Southern District of Florida to the United States Court of Appeal 11th Circuit (USCA), on December 23, 2019, David J. Smith, clerk of court for the 11th Circuit, sent a letter to Robert P. Charrow, general counsel, HHS, inviting HHS to “advise the panel of its views regarding the appropriate interpretation of 42 U.S.C. § 1395y(b)(3)(A) and whether certain MSOs and IPAs may access the private right of action.”

Brief for the United States as Amicus Curiae

On behalf of HHS, the United States Department of Justice (USDOJ) filed an amicus brief in response to the Court’s December 23, 2019 letter inviting HHS to submit an amicus brief regarding “the appropriate interpretation of 42 U.S.C. § 1395y(b)(3)(A) and whether certain engagement service organizations and independent physician associations may access the private right of action.”

In the brief file June 8, 2020, HHS makes it clear that the “Medicare Secondary Payer Act creates a private right of action for double damages against primary payers that fail to reimburse Medicare or a Medicare Advantage plan for such expenses.” Although the MSP Act does not specify who may access the private cause of action, multiple district courts and courts of appeal have ruled that Medicare Advantage plans that have made payments that are subject to reimbursement may avail themselves of the private cause of action. For similar reasons, HHS indicates in its brief that “other entities that have paid for or provided coverage and have therefore suffered injuries in fact based on the failure to provide reimbursement may avail themselves of the cause of action.”

Plaintiffs assert that the cause of action is available to entities—known as MSOs and IPAs—that have contracted with the Medicare Advantage plan. HHS however indicates very clearly in the brief that “MSOs and IPAs may avail themselves of the private right of action if and only if these organizations have paid for or provided medical care and would have been entitled to the reimbursement had it been made.”

When Medicare makes a conditional payment, the primary insurer is required to reimburse Medicare for that payment. 42 U.S.C. § 1395y(b)(2)(B)(ii). That way “the beneficiary gets the health care she needs, but Medicare is entitled to reimbursement.” If the primary plan fails to repay Medicare for the cost of the care, the United States can bring suit and collect double damages. 42 U.S.C. § 1395y(b)(2)(B)(i).

Private parties can also bring suit to enforce this provision. The statute provides that “there is established a private cause of action for damages (which shall be in an amount double the amount otherwise provided) in the case of a primary plan which fails to provide for primary payment (or appropriate reimbursement) in accordance with paragraphs (1) and (2)(A).” 42 U.S.C. § 1395y(b)(3)(A).

On behalf of HHS, the USDOJ suggests that “the Court should hold that MSOs and IPAs may avail themselves of the cause of action under 42 U.S.C. § 1395y(b)(3)(A) to the extent that they have paid for or provided medical care for which they would have been reimbursed if a primary plan had not failed to meet its statutory obligations.” HHS clearly suggests in its brief that “contractors that did not pay for or provide unreimbursed medical expenses, regardless of how they are described, are not entitled to access the private cause of action.” As a result, HHS recommends this Court should analyze whether a particular MSO or IPA has “assumed the relevant health insurance risk by paying for or providing care and assuming the risk of nonpayment by a primary plan.”

Should the Court allow MSOs and IPAs to access 42 U.S.C. § 1395y(b)(3)(A) and permit certain engagement service organizations and IPAs to use the MSP private right of action, the list of entities allowed to do so would continue to grow longer, creating even more headaches for primary payers such as auto, liability, no-fault, and work comp insurers, third party administrators, and self insured entities. Not only would Medicare beneficiaries, medical providers, MAOs, and their assignees, which are already allowed to claim double damages pursuant to MSP private cause of action, continue to be of great concern, but potentially MSOs and IPAs, as well as their assignees, could be added to this ever growing list, adding to all primary payers long list of MSP compliance difficult duties.