In Becerra, an HHS nominee with political skill but no front-line health experience

Xavier Becerra, President-elect Joe Biden’s choice to head the Department of Health and Human Services, is set to be a pandemic-era secretary with no public health experience. Whether that matters depends on whom you ask. 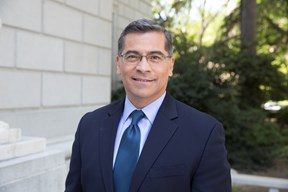 Becerra built his career in the U.S. House of Representatives before becoming California’s attorney general, and some wonder whether his political and legal skills would be the right fit to steer HHS through a health catastrophe that’s killing thousands of Americans every day.

Although he would bring years of health politics and policy work to the role, none of it comes from front-line experience as an executive or administrator running public health programs, managing patient care or controlling the spread of disease.

Yet beyond the immediate COVID-19 crisis, many Democrats see Becerra as an important ally to undo what they view as years of damage from the Trump administration’s efforts to undermine the Affordable Care Act; the Medicaid program, which provides coverage for more than 70 million Americans; reproductive health; and more.

As California’s attorney general since 2017, Becerra has been a thorn in the side of the Trump administration, filing 107 lawsuits to overturn federal action on the Affordable Care Act, contraception, immigration, workers’ rights, LGBT rights, education, consumer protection, gun violence, and the environment.

On Tuesday, Biden will formally introduce Becerra along with other candidates for top health jobs, many with deep public health experience.

They include Rochelle Walensky, M.D., an infectious disease expert at Harvard Medical School who practices at Massachusetts General Hospital in Boston, as the next director of the Centers for Disease Control and Prevention. Biden’s choice for COVID “czar” is Jeffrey Zients, a private equity executive and former Obama administration official who will steer the pandemic response from the White House. Vivek Murthy, M.D., is the nominee for U.S. surgeon general, a position he held in the final Obama years.

Biden has said he will let the federal government’s longtime scientists guide his pandemic response, in particular those at the CDC, which is overseen by HHS. President Donald Trump sidelined the agency, damaging its reputation as the world’s most trusted public health institution.

That Becerra’s deepest experience is political makes some observers wary.

“I think there’s always a danger of letting that sort of cloud the scientific and medical judgment of how best to do things. I hope they can manage that well,” said Jeffrey Morris, a biostatistics professor at the University of Pennsylvania who has worked on COVID issues. He said he had mixed feelings about the Becerra selection. “What is the leadership style, and is there going to be micromanaging from the top down into these organizations? To me, that’s the key aspect.”

“A lot of people are raising eyebrows—even those who are pleased and proud that Biden picked another Californian to join his administration,” South said. “If Republicans are looking to target a few Biden appointees for rejection, you can expect them to make the case that there is no logical nexus between a state attorney general and serving as secretary of Health and Human Services.”

Still, Becerra, who as a member of Congress worked in the House Democratic leadership and was a member of the powerful Ways and Means Committee, has more health policy background and knowledge of U.S. health care finance and delivery systems than many previous heads of the sprawling HHS, which employs more than 80,000 people and has a $1.3 trillion budget.

For three years, Becerra has managed California’s Justice Department, with a $1.1 billion budget and 4,800 employees. As attorney general, he’s been deeply involved in crafting health policy. His office has gone after anti-competitive behavior from hospitals. And he’s sponsored legislation to take on drugmakers and pay-for-delay schemes.

Antitrust enforcement is more commonly handled by the U.S. Department of Justice and the Federal Trade Commission. But Becerra made it a priority as California’s top cop. In May 2018, he brought an antitrust case against nonprofit health care giant Sutter Health, accusing the system of monopolistic practices that drove up the cost of medical care in Northern California.

“This is a big ‘F’ deal,” Becerra said at a news conference unveiling the lawsuit. The case—which encompassed years of work by the department and his predecessors and millions of pages of documents—alleged that Sutter had aggressively bought up hospitals and physician practices across the region and illegally exploited that market power for profit. Health care costs in Northern California, where Sutter dominates with its 24 hospitals, are 20 percent to 30 percent higher than in Southern California, even after adjusting for Northern California’s higher cost of living, according to a 2018 study from the Nicholas C. Petris Center at the University of California-Berkeley that was cited in the complaint.

In December 2019, Sutter agreed to pay $575 million to settle the case and promised to end a host of practices that Becerra alleged stifled competition.

Becerra channeled lessons learned from the Sutter case into an antitrust bill in the California legislature. The legislation ultimately failed, but it would have given the attorney general power to review private equity- or hedge fund-led mergers or acquisitions of a health care system or hospital.

“The Sutter case is a blueprint for a national policy that could start to restore competition for the health care system and save American health care consumers billions of dollars right away,” said Glenn Melnick, a health care economist at the University of Southern California. He views Becerra as “a real expert in some of the most important issues facing our health care system, not just in California but nationally.”

If confirmed by the Senate, Becerra supporters say, he will bring to the job a political acumen from his two decades-plus on Capitol Hill that’s likely to be an asset for the Biden administration as it negotiates pandemic relief bills and other health legislation with a politically divided Congress.

Former California Democratic member of Congress Henry Waxman worked with nearly a dozen HHS secretaries during his time on the House Energy and Commerce Committee. He said he’s not worried that Becerra lacks experience leading a vast health care bureaucracy. The HHS secretary job, he said, is one “where you need political skills to see how far you can get with other people in a political context.” That’s why most HHS secretaries, Republicans and Democrats, have had political backgrounds.

Becerra “understands the policies and has a deep commitment to them,” he said. “I think he’ll do well.”

Public health officials say the job before Becerra is gigantic.

“We want a federal partner who can give us good guidance—we haven’t had that,” Pace said. “For him, I’d say what we need first is starting to get the CDC back into a flagship public health role, with trusted and timely evidence-based guidance.”

Born in Sacramento to Mexican immigrant parents, Becerra would be the first Latino HHS secretary. He was elected to Congress in his 30s and has been involved in national health legislation during the past two decades, even though he is more widely known for his involvement in immigration and tax issues. He joined the powerful House Ways and Means Committee, which oversees tax and health legislation, in the 1990s. The committee played a central role in the drafting of what would become the Affordable Care Act in 2010.

While HHS oversees major federal health agencies, including the CDC, the Centers for Medicare & Medicaid Services, the Food and Drug Administration and the National Institutes of Health, it also has a wide-ranging human services portfolio, including oversight of child care and welfare programs, Head Start, programs for seniors and refugee resettlement.

“It’s not like any one person is going to have everything,” said Dan Mendelson, a former Clinton administration health official, who called Becerra an “inspired choice.” “I think that the most important point is that this is a leader of a team and not the be-all and end-all.”