You may know him as the star of the nationally syndicated series, Flip My Food with Chef Jeff, where he prepares healthier versions of favorite family and restaurant recipes. But before he discovered his passion for culinary arts, Jeff Henderson was a drug dealer and spent nearly a decade incarcerated in federal prison. He’ll tell his emotional story of how he overcame all odds during a virtual keynote presentation at RISE National (formerly known as RISE Nashville) on June 30th. 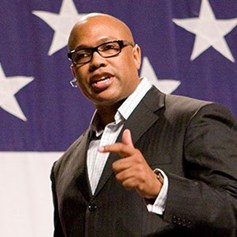 Henderson says it was his inner determination to overcome adversity that inspired his rags-to-riches journey from a child born into poverty to convicted felon to celebrity chef to best-selling author and sought-after public speaker.

That desire, he says, led to his early life as a drug dealer and subsequent sentence to prison on federal drug trafficking charges. “It’s a part of my life I am not proud of,” Henderson recalls, but it was those dark days in prison that ignited his passion to change his life; it is where he learned to cook and found a new dream: to overcome his criminal past and become a chef.

“When you talk about overcoming adversity and biases, an unconscious bias an as African American male, who was uneducated, had never been to culinary school, and had a criminal record, how was I going to go from the bottom to the top? Those are the principles, best practices, and recipes I plan to share with your audience,” he says. “It’s really how to turn lemons into lemonade, sometimes without the water.”

Indeed, Henderson turned his life around after his incarceration thanks to people in the food industry who understood that people sometimes make poor choices and believe in second chances. He got a job in the restaurant business and later in the hotel industry, eventually making his way to Las Vegas, where he became the first African-American named “Chef de Cuisine” at Caesars Palace, and the first African-American executive chef at the Bellagio. He later became a star on his own television shows (The Chef Jeff Project, Family Style with Chef Jeff, and Flip My Food with Chef Jeff) and a best-selling author (Cooked, and If You Can See It, You Can Be It).

“I found people in my industry had heart and was able to build a relationship with a potential employer who saw the value of what I bring, versus the bad choices I made two decades before,” he says.

Henderson believes in the power of self-transformation. Unfortunately, he says, “what happens to many people, the people I call the have-nots in this country, their dreams have been stomped out of them. They have been told they are less worthy. They don’t have value systems, they’ve never clung to hope, they have no dreams, and they put themselves in a mental state of incarceration. That’s what poverty does to people.”

Henderson’s challenge to the corporate world: Disrupt the biases that describe people who come from poverty. People, he says, need hope, no matter their circumstances so they can achieve their own dreams.

“The one thing about me is I always betted on myself,” he says. “As a little boy I always knew there was something special that I was supposed to achieve. Once I discovered what my gifts were, the one, two, three things I knew that I did extremely well, I knew that was my vehicle. It was culinary, it was speaking, and it was writing. Those are the three things that I do today to make a living and help change the world and to make people better people.”

Henderson will deliver his keynote address on Tuesday, June 30th the second full day of RISE National 2020, formerly known as RISE Nashville and now a virtual event. Click here for the full agenda, list of speakers, and registration information.